The CTC Smart Client View Controller is a control specifically designed to encapsulate everything related to the display of the generated forms/views, including all communication with the back-end EAE/AB Suite host system.

The control is implemented as an HTML 5/JavaScript control, allowing it to be added to any HTML 5 application from which access to an EAE/AB Suite application is required.

The CTC Smart Client View Controller allows the generated user interface to be deployed on any modern Smart Device supporting HTML 5 such as PCs/MACs, Tablets/iPads and Phones/iPhones.

Major features of the CTC Smart Client View Controller include:

Included with the Smart Client Generator is a Dashboard feature. This allows users to run multiple ispecs side by side in the same browser window. This feature can be utilized by 'stateless' as well as 'state full' systems.

Dashboard is aimed at managers who require business intelligence type information that is provided by the system via selected ispecs specifically created for the purpose of analysing data and displaying information in a graphical as well as tabular format. Ispecs are shown side by side allowing for comparing data from multiple ispecs. Users who often interact with the same few ispecs may also benefit from using the dashboard.

Dashboard is best viewed on a large screen. Up to 4 different dashboards each with up to 6 dashboard items (ispecs) are allowed.

Users configure the dashboard themselves to suit their needs. Each user defines which ispecs they like to include in the dashboard including various options. The dashboard configuration for each user is stored on the web server under their username. This means the configuration will follow the user in case they move to another workstation or switch to using another browser. Below is a screen shot of dashboards with different configurations: 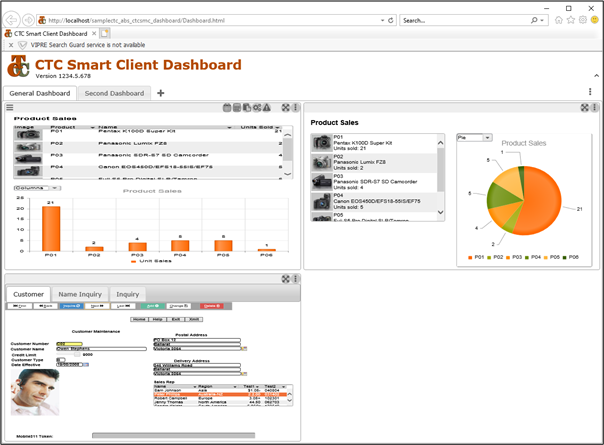 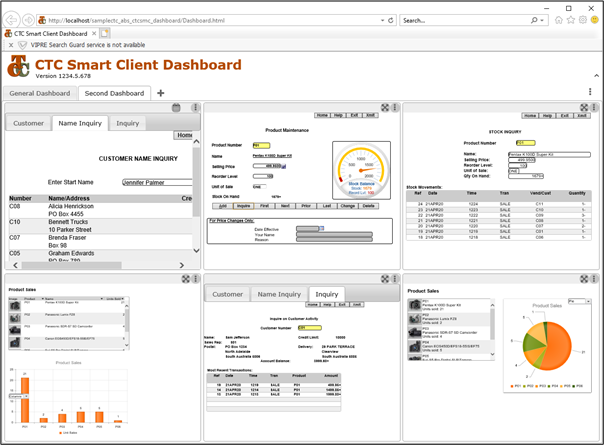 Each dashboard ispec view has a toolbar to which the users can add tools to suit their needs.
Standard tools available to include on the toolbar are:
Custom tools can be added to the toolbar.

Custom Controls will enhance the user interface further. For example:
Custom Controls replace controls painted on the form as in the example below where the DatePicker control replaces a date field painted as a TextBox.

The List Box is a Smart Client control used instead of the standard HTML List Box. This List Box offers many different presentation options such as alternating row styling, horizontal/vertical scrolling and customized data formatting. Below are a few examples.


The Data Grid is a Smart Client control often used instead of the standard List Box. The Data Grid offers many different presentation options such as defining multi columns with column headers, column sorting, horizontal/vertical scrolling and alternating row styling. Below are a few examples.


Icons on Check Boxes and Radio Buttons can be customized simply by setting an option on the CTC Configurator. When setting the option, icons can be styled to suit local styles. Custom icons will scale up or down according to the font size making it easier to select the icon especially on mobile touch devices. Grid lines can be added. Below are a few examples.


Lookup function provides the ability to open an ispec in a separate popup to lookup an item and automatically transfer values of key fields back to original ispec. The lookup popup dialog runs in a separate session in order not to interfere with the state of the current open ispec. The lookup function will automatically log the user into this session.

The example below shows the sequence of events when using the lookup function:

Ispec with the lookup icon added

The example below shows how a Third Party Charting control can replace the Standard List Box and dynamically provide a chart from the data that otherwise would be displayed in the List Box.


The Map Popup Control utilizes the Google Maps API for HTML 5. To use the Map Popup Control, simply configure a group of address fields and attach the CTC Map Popup Custom control. When clicking the map icon, a window opens showing the address location on the map. All navigation capabilities on the map are available as normal.


In addition, the ComboBox control also allows for custom styling and formatting of how the information is presented in the dropdown list:


You can specify how a control is generated. Any property you can specify on an HTML Control can be specified on all CTC Controls, Standard Controls and Custom Controls.

The CTC Configurator provides a Properties Editor as seen below, which allows the user to edit the complete set of properties for a control. Properties can be added or removed to generate the look and feel as required.

The following shows the standard look and feel of the Push Button control.

Standard Push Button, Background Color Property Removed
Buttons, as well as all other controls on the generated forms, can be styled using CSS. The following shows a Background Image added to the buttons using CSS.

Options for Configuring Font Substitution
Fonts painted on the forms can be substituted with any font supported by HTML. When substituting fonts it may be necessary to specify a scaling factor to be applied to achieve a suitable font size.


CopyFrom areas can be generated as a grid in two different ways:
Labels painted directly above the CopyFrom region can automatically be recognized as column headers. This is controlled by the option 'CopyFromAutoColumnHeaders'. The look and feel of the generated grid can be customized to suit local requirements.

Below is an example of a CopyFrom area generated as a Column formatted grid:

Standard CopyFrom Area with fields painted on a single line

Below is an example of a CopyFrom area generated as a Row formatted grid:

Tab Groups allows grouping of ispecs and displaying the group as tabs for easy navigation. Multiple tab groups can be defined.

The toolbar appearing in the header is customizable allowing users to add or remove tools to suit the site requirements.

Standard toolbar included with the installation

The following standard tools are available with the installation:

CopyFrom data copied to clipboard and pasted into Excel Spreadsheet
Copying CopyFrom data can be configured to return to the host as many times as necessary to retrieve all rows of the CopyFrom region.

When deploying user interfaces on Smart Devices such as tablets and phones with touch screen, special consideration needs to be given to whether the size of the controls on the forms are appropriate for easy selection by finger touch.

Options for automatically scaling the controls are provided by the CTC Smart Client Generator. Scaling factor can be specified for fonts, and for controls in horizontal and vertical direction. When specified, the size and position of controls is scaled up or down.

Scaling can be applied for all ispecs in a bundle or for selected ispecs.

When deploying user interfaces on Smart Devices with a small screen size such as mobile phones, special consideration needs to be given to whether the layout of the controls on the forms is appropriate for easy viewing and navigation.

The preference is a layout that does not require scrolling, however, when that cannot be avoided, scrolling in a vertical direction is preferred.

The ideal is a fluid layout that automatically adjusts to the size and orientation of the device. However, controls painted with the forms painter in EAE and AB Suite are fixed in position, which means deploying user interfaces on mobile Smart Devices often requires forms with a layout that is different to the one painted in EAE or AB Suite for traditional PCs or MACs.

The CTC Smart Client Generator offers the Alternate Views feature, which allows users to paint an alternate view of the forms using external tools such as the Microsoft Expression Blend or Visual Studio.

One of the benefits of CTC Smart Client Generator is the separation of presentation from data, which is achieved through the databinding capabilities. This allows the collaboration of forms designers and programmers on a project, where the designers use specialized tools like Microsoft Expression Blend for painting forms while the programmers can concentrate on the business logic.

Creating an Alternate View is as simple as setting the AlternateViewCreate option and then opening the forms in external painters such as Expression Blend or Visual Studio. At runtime, when the user navigates to a form that has an alternate view specified, the CTC Smart Client View Controller will display the alternate view. Alternate Views can be specified for all ispecs in a bundle or for selected ispecs.

List controls such as List Box, ComboBox, Data Grid and Charting can be configured to display external Xml formatted data files. List controls are a convenient way of displaying options for the end user to choose from and often it can be efficient to store and maintain these options in Xml formatted files outside of the EAE or AB Suite database.

List controls include additional properties that allow specification of the file path, an expression for extracting nodes, and columns to display in the list. The files can automatically be transferred from the server and cached locally on the client work station until a new version of the application is deployed. Nodes and columns from the Xml file can be displayed automatically in the list according to specifications on the control, or manipulated in the code behind the form.

As part of the generate process, the generator can automatically compile the generated application and build the necessary dll's. This is achieved using MSBuild, the build platform from Microsoft used by Visual Studio. Together with the option for configuring the Runtime parameters, this means the application is ready to deploy when the generation of the user interface application is complete.

System trace is normally enabled centrally by the administrator by setting parameters in the web.config file. This turns tracing on for all users and is therefore only appropriate in a test/development environment.

In addition to the centrally controlled system trace, tracing can also be turned on for individual client sessions at runtime. When enabled, system trace can be turned on/off at any time from a client during a session. When turned on, log information is written to a separate log file on the web server specifically for this client session. The log file can be retrieved from the web server and displayed on the client for analysis.


For further details on all features and capabilities see the Online Documentation.